skip to main | skip to sidebar

Today was another day where the weather predictions weren't encouraging.  Although it threatened to rain during the entire hike the worst that we got was a small amount of drizzle.  Atty had come across this hike (French Beach) from one of the guides we picked up on the way to Twillingate. Unfortunately the directions to the start of the hike weren't the greatest but we did our best and found the location eventually.  As mentioned before this was a typical blustery Newfoundland day.  The trail did however provide many visual treats with coastal views of interesting rock formations.  It wound along the coast and rose up to a ridge at one point with several tricky climbs along the way.  With the occasional drizzle and overcast sky the vegetation became a deep lush green.  It really was beautiful despite there being no sun. We stopped at the base of a ridge for lunch on the way back to our starting point (this was a looped trail).  Before continuing on I decided to "water the plants" by (what I thought was) facing away from the path towards the ridge line.  Half way through we noiticed another hiker coming down from the ridge line towards us....um embarrassing to say the least!  The hiker tuned out to be a teacher from Toronto named Vanessa.  Atty and Vanessa hit it off from the beginning and as result Vanessa finished walking out with us.  We later bumped into Vanessa again at the local liquor store in Twillingate.  It turns out all of us had plans to go to Fogo Island the next day so we arranged to meet on the island for lunch. 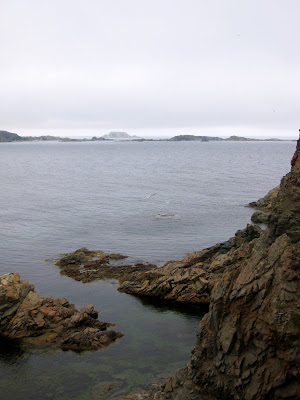 Richard
I'm a Programmer / Analyst and in my spare time I enjoy photography, hiking and travel.